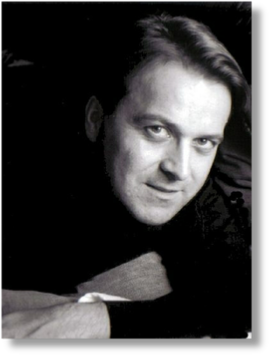 After studying piano at the Lemmens Institute in Leuven, he enlisted as a chorister in many sets as Capella Santi Michaelis led E.Van Nevel, with all Currende and the choir of the BRT radio. It deepened the baroque style in Paul Dombrecht, René Jacobs, Florean Heyerick and abroad, in Dirkjan Horringa.

Having chosen to devote himself to singing solo, he then formed with renowned teachers in Belgium, the Netherlands and England. So he graduated first prize in opera singing concert, oratorio and lieder, as well as the first prize for chamber music and a higher degree of lieder and oratorio at the Royal Conservatory of Brussels.

He has performed at numerous festivals such as the Belgian Baroque Spring Festival Sablon where he played King Arthur H.Purcell, the Festival of Flanders and Wallonia, the Summer Festival Maasland as a member of the ensemble The Malufi -singers and finally Festivals Stavelot and Spa in Fall Musical Ensemble Henry Du Mont.

In Prague, he sang Vespers of the Blessed Virgin Mary C. Monteverdi under the direction of D. Horringa, Spain has played the role of Ferrando in Cosi fan Tutte, W. A. Mozart, the Netherlands and Germany, he sang Der Esel's Schatten, J. Strauss and Italy, he gave a Masteclass the composer L. Marenzino.

He repeatedly sang the role of the Evangelist in Bach's Passions in Belgium and the Netherlands. He enriched his repertoire of English Baroque under the direction of G. Janssens in Belgium and J. Griffith in England: The Messiah and Judas Maccabeus by Handel, Die Schöpfung and Haydn's Stabat Mater ...

He sang at the Palais des Beaux-Arts in Brussels and the Grand Duchy of Luxembourg RTL-TVI. Under the direction of René Jacobs, he sang in the opera 'Eliogabalo' Cavalli Baroque Festival in Innsbruck (Austria 2004). In the directory of the operetta (Offenbach, Lehar, Kalman, Strauss, ...), he played twenty roles in opera houses in Belgium and abroad.

And the Government of Aragon (Spain), he recorded 'The Misa de deceaseds' and 'oficio of deceaseds' works of Spanish composer Mariano Rodriguez Ledesma (European Premiere)