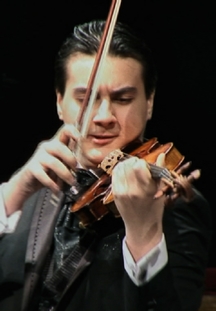 Vilmos Csikos was born in Budapest (Hungary). In 2001 he moved to Belgium where he started to play violin two years later at the age of 7 at the Tchaikovsky Music School with Prof. Igor Tkatchouk. He has continued his violin studies with Mr Yossif Ivanov.

In addition to his participations in competitions Vilmos also has taken part in master classes with Augustin Dumay and Joshua Epstein and has given concerts. He has collaborated with the Ensemble Orchestral 'Young Soloists' from Belgium and the chamber orchestra Aria under Etienne Rappe, to name but a few.

F. Kreisler, Prelude and Allegro in the style of Pugnani

A. Vivaldi, Concerto for four Violins in B minor (first movement)

A. Vivaldi, The Four Seasons – 'Summer'

If you are interested in working with Vilmos, please get in touch with the EMCY Office.