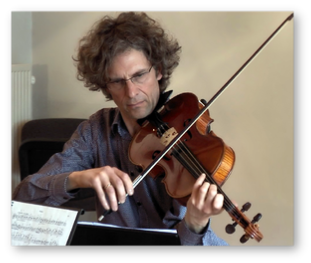 The composer and violist Vincent Royer is a native of Strasbourg, France. He studied at the National Conservatory of Strasbourg before completing his graduate studies in the musical "High Schools" in Freiburg and Cologne (Germany).

Vincent Royer Xenakis was awarded the Prix de Paris (1991), Bourse Lavoisier (1995) and the Stock Exchange of the Ministry of Culture in Paris.

The integrity of his creative process, and the richness of his performances are a privileged guest at many international festivals; MondayEvening LA, Chicago Soundfields, NY Two Three, Agora Paris, Ars Musica Brussels, Haus der Kulturen der Welt Berlin, Cologne reiheM ... his recording of the complete pieces for viola H.Radulescu (SubRosa 248), has received much international attention in 2007 and won the highest honor the musical journal "Crescendo". Selected by the artistic direction of NY Fashion Records for the full Scelsi, his recording of "viola parts" will be released in early 2011.

Early in his career Royer became interested in exploring new forms of artistic expression and founded with the pianist Paulo Alvares Cologne Ensemble Alea collective dedicated to composition and improvisation. Interacting with actors, dancers, artists and mimes Royer and all were created in Europe and Latin America many shows. Canada (1995), Royer meets Ircamien computer and composer Gerhard Eckel and visual artist Bob Verschueren and computer. Their common taste for research at the frontiers of sound perception directs their work into new projects. Royer improvises on spontaneous noises plant compositions Bob Verschueren, the "Traverse" for viola and computer room has been selected by the International Computer Music Conference in Berlin in 2000

Other meetings open vast spaces of artistic investigation: the jazzman and composer Frank Gratkovski - Interplay project - with the artist Joëlle Tuerlinckx - performances in 2008 and 2009 - in May 2010 Royer founded a new formation with the architect and media artist Matthias Siegert (see Sonic Visions)

As a solo performer and composer, Vincent Royer feels a deep affinity with the so-called "spectral" composers. The works of Scelsi of Radulescu of Grisey and Murail have a lasting influence on his creativity. As part of an artistic residency at the Banff Centre for the Arts / Canada, Royer recorded his catalog of sounds and noises viola based on which he composed several pieces for instruments and sounds stored.

Territory and favorite repertoire, chamber music is the discipline par excellence while violist ... Royer is a member of the towers Gürzenichquartett towers quartet Lucero Cologne since 2008 and a founding member of the quartet BRAC. Its partners are the Danel Quartet. Paul Meyer, Gerard Causse, Jean-Pierre Peuvion, Brigitte Foccroulle, Séverine Ballon ...

Since 1998 he formed a duo with Belgian pianist Jean-Philippe Collard-Neven. The interpretation of the ultimate work-Schostakovitch sonata for viola and piano op.147-in the presence of one of his most faithful disciples Viktor Kissin is the starting point for many premieres of works dedicated to Duo Royer-Collard Neven. Works by Suzanne Giraud, Luc Ferrari, Jean-Luc Fafchamps, Jean-Pierre Deleuze, Vinko Globokar Michael Riessler, David Shea, Fabrizio Cassol.

In 2001 Royer met the composer Luc Ferrari in Chicago, back in Europe, a close friendship and an intense artistic collaboration weave. Ferrari has written three books for the duo (viola, piano and memorized sound) which the recording and film Dominique Lohlé CD / DVD at SubRosa won the Coup de Heart of the Academy Charles Cros in 2008.

The educational achievements of Vincent Royer are multiple:

Vincent Royer Professor of Chamber Music at the Royal Conservatory of Liege.