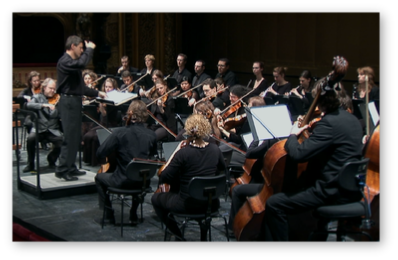 In residence at the Regional Cultural Centre Eden - Palace of Fine Arts in Charleroi in 2005, the chamber orchestra Aria is an original concept of Belgian cultural landscape. It consists of the best young musicians of the country, from the Royal Conservatory or students at the end of the cycle in these institutions.

With this professional immersion, they have the opportunity to gain as much experience, through a dynamic and exciting precise work in a variety of directories.

A strict selection ensures production quality of this set which is the culmination of the professional integration program and the flagship of the artistic project of the association Sinfonietta.

From the outset, Aria has attracted a large audience during his performance, including accompanying the soloist Shadi Tarabay, winner of the Queen Elisabeth International Competition in concert arias by Wolfgang Amadeus Mozart.

This eclectic training also occurs in concert with the choir, such as those given with the chamber choir Ishango in the Missa Dei Filii Jan Zelenka Disma and High Mass in C minor by Wolfgang Amadeus Mozart.

Another unique experience brought this phalanx to produce the comic opera La Belle Hélène by Jacques Offenbach she performed in Paris, where she has been a great public success.

Aria has developed regular collaborations with the Queen Elisabeth Music Chapel and talented soloists. A first draft was to decor the Royal Palace and its Christmas concert in 2006, with, as soloists, many students of the College of Music singers and Plamena Mangova since winning the Queen Elisabeth Competition in 2007. The whole was under the direction of Arie Van Lysebeth.

A second collaboration led on a tour of three concerts with the young prodigy violinist Leonid Smorguner. Aria so happened within the Chapelle Musicale itself, at the Palais des Beaux Arts de Charleroi and the season of the Philharmonic of Namur.

End of 2007, Aria receives the reward of his efforts in playing for the second consecutive year at the Christmas concert at the Royal Palace of Laeken, before His Majesty King Albert II and the royal family. This prestigious event is broadcast, delayed by the second French channel RTBF.

Besides concerts Offenbach Strauss in the festive spirit of Christmas and year end of 2008, Aria shows in 2009 in Bruges three operas: The Noze di Figaro by Mozart, Nine by Maury Yeston and Little Women by Mark Adamo which was the first European. In March 2010, Aria works with the chamber choir Ishango in a program called "Sounds of Silence" and totally dedicated to two main composers of recent years: Arvo Pärt and John Tavener.