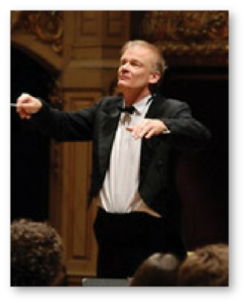 It is at the Liège Conservatory in the class of Roger Rossel BATON Patrick made his full musical studies (piano, writing, music history, analysis ..) where he obtained the First Prize in Conducting. . He graduated Singing Melody and the Opera Musikakademie Eupen with Walter Meessen.

First Prize for Choral Conducting at CRMLg he founded the Ensemble Vocal Forlane, and co-directed with Patrick Davin, the Forlane Orchestra. For two years, he is also the assistant Philippe Herreweghe with the Liège Philharmonic Choir.

He also leads the major orchestras of Belgium, first and foremost the Chamber Orchestra of Wallonia, the Orchestra of the Royal Opera of Wallonia (in 1993) with whom he provides a large number of opera productions and ballets, musicals, and is particularly popular with the public with this project, which is the initiator and the linchpin for six seasons in the Liège Philharmonic Orchestra: Orchestra to Reach of Children. Surrounded by artists such as Marie Gillain, Poelvoorde, Bruno Coppens or Keane, he met with a series of concerts young people a resounding success, bringing the Orchestra of Monte Carlo to adopt the concept in its direction.

The 2007-2010 season including the lead at the head of the Orchestre Philharmonique de Monte-Carlo (where he is regular guest conductor since 2001), the Tchaikovsky Orchestra of Moscow Radio, the World Chamber Choir, to Rouen Opera, in Paisiello Theatre of Lecce, the Hungarian Opera in Cluj (Romania), the State Opera Bourgas (Bulgaria), the Chattanooga Symphony Orchestra, the Grand Théâtre de Luxembourg. has recorded for Philips , Forlane, Syrinx, Full Game and Cypress, Naxos.