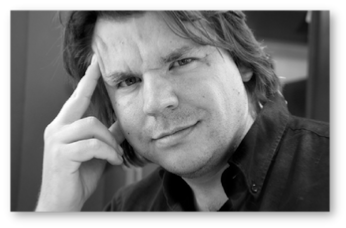 Eric BETTENS was born in 1973 and has always lived in his native region, Hainaut. From the age of six years, he studied at the Academy of Courcelles: from music theory, trumpet, percussion, chamber music and orchestra, he devotes much of his youth to his passion. He continued his training by himself, along with a classical academic training that allows him to pursue university studies. But music is a must ...

Eric BETTENS is a musician and composer, a true music lover. Subtle blend of electronic and acoustic instruments sometimes embellished captured in Nature sounds, the works he composes not only the admiration of the public and professionals, but also won numerous awards.

It was in 2001 that the music of Eric BETTENS career really began when Luke BAIWIR, great composer from Liège, convinces NYDHIS present - a composition in three parts - the World Festival of Underwater Pictures of Antibes France. Conquered, the jury awarded him the Prix François de Roubaix, the highest award of the festival.

Eric's style is said and seduces. Since 2002, many orders at a faster rate than supported. In a few years, he composed the music for more than thirty films and documentaries, including Danny VAN BELLE Michael AW, and participates in the evaluation of several music notation software.

On three occasions, Eric BETTENS was invited by Michael AW as a jury member at Celebrate the Sea festival in Singapore, where he gave two concerts at Suntec City, and Manila in the Philippines, where he has several works during the closing concert in the presence of former President Gloria Arroyo and received the Best Original Music Award for the music of the film THE WORLD OF CRUSTACÉSde Danny VAN BELLE.

During the 2010 season, he made YVAIN THE CHEVALIER LION operatório - between opera and oratorio - for choir, orchestra, three soloists and narrator on a libretto by Marc RONVAUX, adapted from a novel by Chrétien de Troyes.

He gave concerts in Singapore, Belgium - with a "sound and light" which is accompanied by a symphony orchestra - and Lyon, France with Luc BAIWIR.

Eric BETTENS part in a film, scientific and historical month-long expedition to Antarctica. During this fabulous trip, he wrote the music for the film made, drawing inspiration from the beautiful landscapes of ice and sensations that he had never before experienced.

2011, Eric composed the music of the last movie FILE REINCARNATION of Jean Jacques Rousseau and music films LAW OF HUNGER Danny VAN BELLE who won the Palme d'Or and the Prize of the President of the Republic at the World Festival of 'Underwater Pictures of Antibes, MIXED WATERS Els and Bruno VAN SAEN best musical adaptation in Marseille, UNDERAWATER BALLET IRELAND Stuart (Australia), best Original Music Award Festival Celebrate the sea of Singapore.

He spends part of the year writing FOOTPRINT, his third album. It is also nominated for Hollywood Media Awards.

France and five other stations in Spain, Germany, Poland repeatedly broadcast the film Lembeh THE SPLENDOR OF THE WEIRD, which he composed the music in 2008.

In May, he is on stage, alongside Luke BAIWIR and in front of thousands of spectators for the mega concert 25 years the center Nausicaa in Boulogne-sur-Mer.

Despite his success, Eric takes courses at the Royal Conservatory of Liege in order to study the composition of a more academic way and compare his work to that of other students and teachers.

Among his plans for 2012, in addition to the release of his third album scheduled for early this year, Eric already has several commissions and projects.

Synopsis: A man, Lucien Hort insurer, through the administrative city at a rapid pace. The wind snatches his hat from head to deposit a little further into the hands of Desire. Lucien wants to quickly retrieve his hat. A policeman gets involved but Lucien died suddenly of a heart attack. Taking advantage of the inattention of the police, Desire line with the hat and the unfortunate case of insurer.

YVAIN THE CHEVALIER LION operatório for choir, orchestra, soloists and narrator - Booklet Marc RONVAUX, adapted from the novel by Chrétien de Troyes, played by more than 50 musicians, 65 singers, soloists 4. This work will be nominated HOLLYWOOD MUSIC IN MEDIA AWARDS.

Music of the film I AM ON A LIST, Jean-Jacques Rietjens

Soundtrack ANTARTICA ELYSIUM EPIC, which will be released in 2012

Arranging music for the play The Council of Love, Oscar Panizza, directed by Bernard GILLARD

Various written for the duo of Russian acrobats music Plachkov

BETWEEN HEAVEN AND SEA second album

Soundtrack Lembeh THE SPLENDOR OF THE STRANGE Danny VAN BELLE

Palme d'Or at the World Festival of Underwater Pictures of Antibes

Soundtrack I HAVE A DREAM TO SHARE Jean DEBREMAEKER

Music of the film THE WORLD OF SEAFOOD Danny VAN BELLE

Palm bronze at the World Festival of Underwater Pictures of Antibes

Music 10 films Danny VAN BELLE for the center of the sea Schevingen, Holland

Music for a play, CHERRY ON Feydeau, directed by Michelina BALDASSARRE representing Belgium at Theatre Festival Monaco in summer 2005

Music of the film THE WORLD OF SNAILS D. VAN BELLE

Palme d'Or at the World Festival of Underwater Pictures of Antibes.

Music of the song MY HEART BLEED of Lysia NELL

Music of the song LOST IN THE LIFE Claudy Delfosse

LEGEND, set of 10 pieces for synthesizer

Music songs THE LABYRINTH OF LOVE, WHY LIE THAT CAN TELL ME and Nathalie FAGNANT