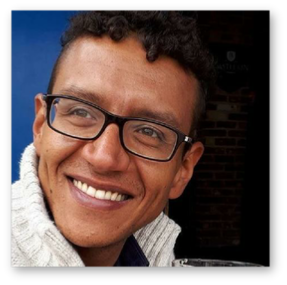 After graduating with flute and Piccolo with Grande Distinction at the Royal Conservatory of Brussels (2007), Alain continues to perform with several ensembles but has also started a vocal training in parallel.

His operatic activities began at the beginning of his successful apprenticeship with two semifinals of international competitions ("Concorso Internazionale" Muisca Sacra "of Rome (2010)" and "First International Competition of Baroque Chant of Froville" ( Lorraine) (2011) "). He auditioned very quickly for the Biscantor and Métamorphose ensembles of the Flanders chapel of Roubaix in 2013 and has since realized with them many projects of a capella vocal music of the Renaissance (Josquin des Prés) but also many Italian and French madrigals (Monteverdi , Bertrand, Ockeghem, Marenzio ...)

Alain auditions and enters in 2013 in the brand new New Baroque times choir and carries with them a dozen projects in chorus and solo in works by Victoria, Monteverdi, Mozart, Fauré, Purcell or Haendel ... With New Baroque Times Orchestra, soloist "Ode for Queen Anne's birthday" in March 2015

From 2015 to 2016, he performs in Belgium and abroad in recital, solo, guest at various concerts with ensembles such as Ensemble 21, Quatuor Clarias, Terra Nova Orchestra, L'Orchester du 21ème century, The New Baroque Times ensemble, the Brussel chamber choir, The Metamorphosis ensemble, ...

In 2017 and 2018, he is involved in many projects (Josquin Tours in the Cevennes September and October 2017 - Project concert on German motet with Il Buranello November 2017-) The Great Mass in C of Mozart November 2017 with The New Baroque times - Handel's Messiah at the Royal Conservatory of Brussels March 2018 Stabat mater and Vivaldi's Dixit Dominus in Ales in the Cévennes March 2018, "the birth of the oratorio with Harmonia Sacra in May 2018. He also performed soloist and vocal ensemble in the Cévennes during the summer of 2018. In September, "Josquin and Spain" was released, a record in which he participated in September 2017.