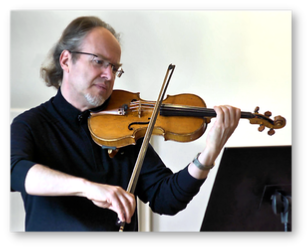 In 1980 and for three years, he joined the prestigious Youth Orchestra of the European Community, and plays alongside legendary chefs like Abbado, Karajan, and Baremboim. In 1982, he joined the orchestra of the Mint, where he held the position of first soloist and section leader. He also performed with the Symphony Orchestra of Flanders, the Flemish Opera, the Flemish radio, with the Chamber Orchestra of Wallonia, etc. .... So he has the privilege of working with top chefs (A. Pappano, S. Cambrelin Sir Pritchard, R. Jacobs, K. Ono, M. Schoenwand, Herreweghe, ...) as well as the greatest soloists as J. Van Dam, V. Repin, M. Argerich, H. Shiff, W. Boeykens Mr. Caballé, A. Dumay, T. Tielemans, P. Catherine

As concertmaster with the baroque orchestra Prima la Musica he participated in numerous concerts in Belgium and abroad, as well as recording several CD's. As a chamber, which means he spends a lot of energy, it is part of the String Trio of Money and occurs in Belgium and abroad with musicians like Renata Scotto, Daniel Blumenthal, Jean-claude Van Den Eynden, Antonio Pappano, Levente Kende, Tatiana Samuil, soloists of the Mint, etc ...

Meanwhile, he continues to teach violin and gives much of his time to the development of young orchestral practice, including through the orchestral courses the GPEI, the chamber orchestra of young Aria.